THE MINERAL THAT ATTRACTS
WATER AND NUTRIENTS

Source and Genesis of Alginit

They played a very important role in the genesis of Alginit. Saline water from the surrounding Pannonian Sea together with fine floating particles penetrated the porous tuff cones. The connection of the outer sea with the inner part of the crater was considerably limited, sometimes restricted, so that neither streams nor waves could disturb the unmoved fluid contents of the crater.

Within the crater of such an erupted volcanic cone a very rare green alga (Botryococcus braunii) proliferated. This alga is a green, pyramid shaped planktonic microalga of the order Chlorococales (class Chlorophyceae). The algae and other floating particles settled down on the bottom of the crater. The resulted mineral is known as Alginit. It developed under anaerobic conditions.

The erosion of the crater rings resulted in an accumulation of macro – and micro nutrients such as P205, Ca, S, Mn, Fe, Cu, K within the crater lake, which supported the multiplication of the algae intensively.

The inflow of hot spring water at 12-14 °C containing carbon dioxide and the resulting constant temperature of the see water provided a positive role for the massive proliferation of the Botryococcus Braunii algae. It is believed that coincidental occurrence of the above-mentioned events resulted in the genesis of the today known Alginit layers.

Alginit belongs to the category of oil shale but it has got unique and individual attributes, which caused an alteration to the basic oil shale in terms of its physical and chemical characteristics. Alginit, with a purity of more than 90%, can only be found in Hungary or more precisely in the Carpathian basin.

Properties of Alginit - a Unique Gift from the Earth

The pH value of Alginit reaches a very weak alkaline value. When measured in a 25 ml 0,01 M CaCl2 solution, the pH is 7,6. Its moderate alkalinity has a favourable effect on the amelioration of acid soil. The application of Alginit in alkaline soils does not increase the pH value.

The carbonate content (CaCO3) of Alginit exceeds up to 22 %. The limestone particles are very fine, readily soluble and thus extremely fast acting.

The soil texture of Alginit proves a particle size distribution of 54 % clay, 40 % silt and less than 6 % sand. According to the German classification (AG Boden 2005) it corresponds to the soil texture “slightly silty clay”. The X-ray diffraction identified a smectit content of 50 % and an illit content of 40 % in the clay fraction, which explains the great ability to hold water and nutrients.

Furthermore Alginit contains 10% of Vermiculite/Chlorite and most of the macro- and micro nutrients that are necessary for a complex amelioration and conditioning of the soil as well as for the development of plants.

The Advantages of Alginit - irreplaceable

Water saving by reduction of evaporation and seepage

Alginit can absorb and hold far more then half of it’s own weight, without seepage or evaporation. In fact 1 t of Alginit is able to store at least 630 l water of which 410 l are in any case plant available. Once stored, this water remains available to supply plants with sufficient quantities of water, allowing them to withstand periods of drought. The cycle of water retention and release can occur repeatedly and eternally.

Alginit`s high organic matter content amounts up to 19 %. This fact raises the original organic matter in sandy soils and has favourable effects on hydrology and soil structure. It also increases the storage capacity for a long-term supply of nutrients. Furthermore, Alginit contains most of the macro- and microelements necessary for achieving optimum, balanced soil conditions.

Alginit contains volcanic rock that enriches the soil with minerals and trace elements which are constantly being absorbed by plants. Its fossilized algae biomass considerably increases soil fertility.

The high clay and organic matter content of Alginit leads to a very high cation exchange capacity (35 cmol kg-1). This, in term, results in the ability to increase the storage capacity of nutrients and prevents leaching.

The average cation exchange capacity of sandy soils is 2 cmol kg-1. Applying Alginit to such kind of soils contributes significantly to cost reduction in terms of personal, agriculture machinery operations and fertilisers.

Focal Markets for the Application of Alginit

Alginit is recommended for the use in soil amelioration wherever there is a need to bind and retain water and nutrients. This applies to all cultivated land, especially to loose, sandy soils and it improves the soil quality in terms of an increased organic matter content.

Especially the arid and semi arid zones in the world, such as in the Near and Middle East, North Africa and Asia are high potential markets for Alginit.

One of the most important features of Alginit is the high field capacity and the available water capacity that reaches a value at least of 63 % and 41 %. It follows that 1 t Alginit is able to store at least 630 l of water of which 410 l are directly plant available.

Alginit allows a natural water management. It has a positive, regulating effect on the water content of soil by steady and even release of its bound water to the surrounding plants. The cycle of water retention and release can occur repeatedly. Therefore Alginit is suitable to combat desertification and regain agricultural land.

Alginit fulfils the environmental standards of organic soil cultivation, which prescribe the exclusive use of natural materials. Alginit is used on organic farms and in the natural food industry.

Usage of Alginit is recommended in the following application areas:

The dosage of Alginit depends on many different factors like soil type, climate conditions and used plant species.

We offer our clients an individual calculation of dosage, balanced to their needs. According to our experience the average dosage of Alginit amounts to 8-15 Vol.-%. 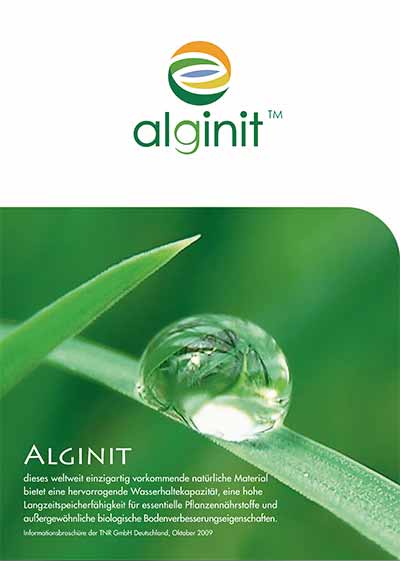 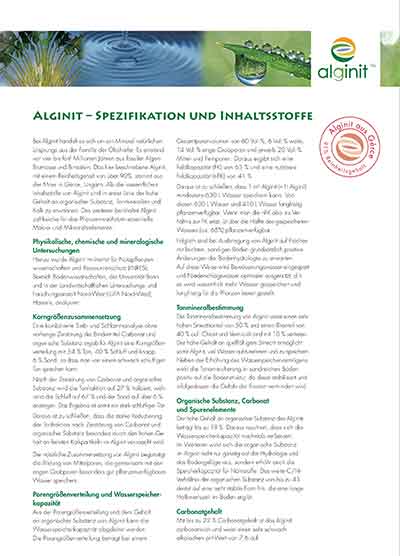